add credit - kinda the subject of the movie

Not really sure why I am asking IMDB to add me. I was in the credits during most of the film festivals and during the releases in theaters and on Netflix. I was one of the primary subjects of the entire film, and in the top three of screen time, but I was myself on screen. Maybe the confusion comes that a child actor also played me in scenes of the film (with my name in his credit) .... I know it can be confusing but the other counterpart/subject still remains in the credits as "himself" , and I am missing. Again, this was my movie, my story, my experience. - there would be no movie at all, if there wasn't a "porter" to create the experience in the first place.

So IMDB, how do we correct this?

Thank you, very much,
Porter Fischer

I assume this is you:https://www.imdb.com/name/nm10136561/Your name is already attached to the film 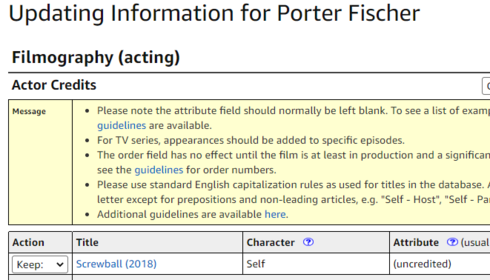 but IMDb has a policy that uncredited roles only show up once the person has a credited role.https://help.imdb.com/article/contribution/filmography-credits/cast-acting-credits-guidelines/GH3JZC74FVYKKFMD?ref_=helpsrall#

Please note that a cast member needs to have at least one credited entry in the database before we will list their uncredited work. If we have accepted uncredited entries, these will automatically go live upon acceptance of credited entries. We may make an exception in very rare/specific circumstances (i.e. on movies released before 1990, episodes released before 2000 and/or for high-profile credits, such as an uncredited cameo appearance by a celebrity), but in most cases we will not list an uncredited credit unless you have a pre-existing credited filmography.

If you were actually listed in the film's credits, then submit an edit to correct your credit, including a link to a screenshot of the credit (this thread would be a good place to post that image, or any other accessible site) in the "provide an explanation" box. Hopefully that screenshot also shows other cast members to enhance its credibility.

I read the guidelines, but I am talking about this section, in the full cast.

Porter Fischer - Self. I should be 1st or at least 2nd. I have most of the screen time behind Bosch, way way more than Elfrink, and Gomez has 3 lines on camera. I was listed in this section before, why would I be removed and non of those guys.

And Gomez and Elfrink appear as consultants. Tony Bosch doesn't appear anywhere in the credits

Porter: Can you get a screen capture showing how your name appears on screen? For example, does your name appear in the opening credits or closing credits or in a caption during the course of the film?The order numbers used by IMDb do not depend on the amount of screen time that each person gets, just on the order of their credits. This may be a situation covered by the following paragraph at https://help.imdb.com/article/contribution/filmography-credits/credit-order/G8QZ9QSY5EVKAPNF#:

For documentaries or talk shows where the people appearing on camera are generally not in a separate cast list, their first onscreen appearance where they are identified either by a caption or spoken name is used to determine the order. Any narrator/host listed in opening or closing credits would be treated as the first cast member, and would precede people identified only within the documentary.

Practically speaking, if there is a cast listing in the opening or closing credits, that list would take precedence for determining the cast order, and any people credited only in on-screen captions would be listed after them, in chronological order.

Hi, gromit:I'm compiling screenshots of the documentary to amend the current cast list and enter correct order numbers (by the way, Mr. Fischer is identified by an on-screen caption within the documentary, not in the opening or closing credits; see below). 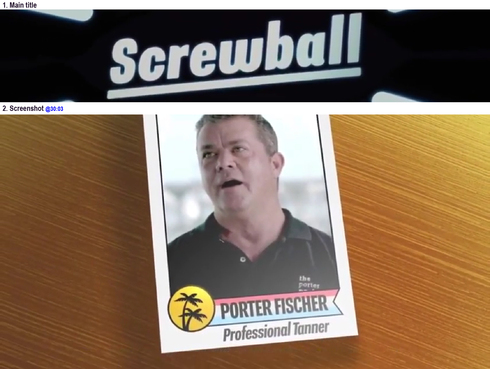 In the meantime, I propose that this paragraph of yours...

Practically speaking, if there is a cast listing in the opening or closing credits, that list would take precedence for determining the cast order, and any people credited only in on-screen captions would be listed after them, in chronological order.

...be added to the  cast order guide, because I believe that's a very frequently asked question when someone's contributing to documentaries, and the current wording of the Help section can be ambiguous. Thank you!

Thank you very much :)
You are a "champion"..I appreciate this and hope this clears everything up.
Did you enjoy the film, at least ? :)

may i call you, I have another one-off that I know you can guide me in the right direction. Way too complex for my to type, as I am a dolt...lol. I know this may be un-orthodox, but I swear i am harmless :)
If yes, then I can provide my number or whatever you prefer.

Hi, Porter. Thank you very much, but we can't assist by phone. Please try to explain which title you're having problem with and I'll try to help...

ok, ur awesome #1
There was a great extra named Ella on the film and she did extra work on like 3-4 scenes. She was awesome, big social prompter for the film, and great little warrior. The was her first film, and she nailed it :)
Well she was listed as an extra in the film, and that was great and since then has grabbed and accomplished other roles. But her MOM called me and asked for my help with IMDB, because (i didn't know this about the biz), that "uncredited" actually HURTS her in the casting world. That moniker, makes it harder for her.
Look, I don't want that. and I can voucher for if I can. But if the rules (which I understand) don't allow her a credit, then she is requesting to be REMOVED all together, so it doesn't hurt her future.
I apologize, but I am a softy for all the kids involved, that made this happen. I want them to go on and become great. I am a dummy and they made me look good :)....lol

How do we place Ella in the best possible place?﻿
﻿And again, you are the Uber'-IMDB Persona....lol

I'm guessing you're talking about Ella Paige. Unfortunately she's not listed in the on-screen titles, so the attribute (uncredited) needs to be attached to her entry for the documentary.

is known for making no exceptions to rules, much more in cases as clear as this one, sorry. Please note that, contrary to some people's belief, this tag confirms that she worked in the film, hence she took part in a project with very positive reviews.

She's a very young actress, so it's natural that her very first roles can be unrecognized. I'm sure that, if she's really talented, she will succeed no matter what label is thrown her way.

Thank you very much for your compliments... and congratulations again for a great film.

Hi, Porter:First let me say that, being from Spain, I'm pretty alien to baseball, but I really enjoyed the film. An intelligent and funny way of telling the story. Congratulations!Having said that, you should have been listed in the cast section with the attribute (uncredited), were if not for the happy fact that Screwball is a documentary, so, despite your name doesn't appear in the end credits' cast list, the following order rule applies:

If someone is assigned an order number, the logical conclusion of this rule is that people in documentaries (or talk shows) whose name doesn't appear in a separate list, but who are identified by a caption, are considered as credited for cast listing purposes. You (and Gomez, Elfrink and Bosch as well) are in the same situation I've just described.Here's a composite of the likely eligible cast entries. I haven't submitted an update yet (awaiting confirmation by a staffer).

Note that several other people who are mentioned by name (e.g. Jose Canseco), are featured only in archive still photographs. Guides are confusing about the eligibility of these credits (see Peter's comment at this thread); until

issue appropriate instructions (here perhaps?), I decided not to submit them for the moment (neither as cast entries nor reference-to- keywords), in accordance with Michelle's previous answer.

And Gomez and Elfrink appear as consultants. Tony Bosch doesn't appear anywhere in the credits.

Actually, regardless the documentary order rule, all 4 of you must be credited for this film, as crewmembers, since all your names appear in the Thanks section (the producers wish to thank), and Elfrink and yourself also in Miscellaneous (materials courtesy of). 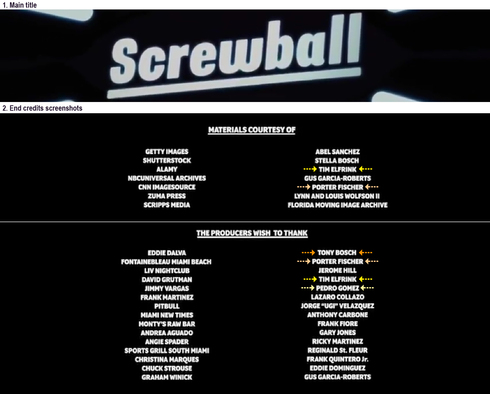 Anyone here can be added to the filmography for Screwball, but unless they are in the opening or closing credits it must be with an uncredited attribute.

Thank you very much ljdoncel, I hope this is enough to suffice for IMDB. I also have the film house (Rakontur) chiming into IMDB, as well :)

You tell me how to promote or thank you, and I promise ..it done. You are efficient, detailed and complete. You are stone cold, bad a4s. You deserve "champion"

Hey Porter - checking the responses here I can see that you are credited as "Self (uncredited)" which is correct.

Grayson: Actually, Porter is currently listed as "Self - Professional Tanner" which is correct. This film is a documentary, and he is credited not in the opening or closing credits but by a caption during the course of the film, which counts as being credited rather than uncredited:

For documentaries or talk shows where the people appearing on camera are generally not in a separate cast list, their first onscreen appearance where they are identified either by a caption or spoken name is used to determine the order.

You're absolutely right Gromit - I just checked with our cast expert and they said the same. I've flagged with the Help team that this should be more clear in the Help guides, as that's what I went off for my answer. As you can see from the quote you've copied in - it doesn't actually say explicitly that a documentary subject identified by caption shouldn't be marked as uncredited, just where their name should appear in a cast list.